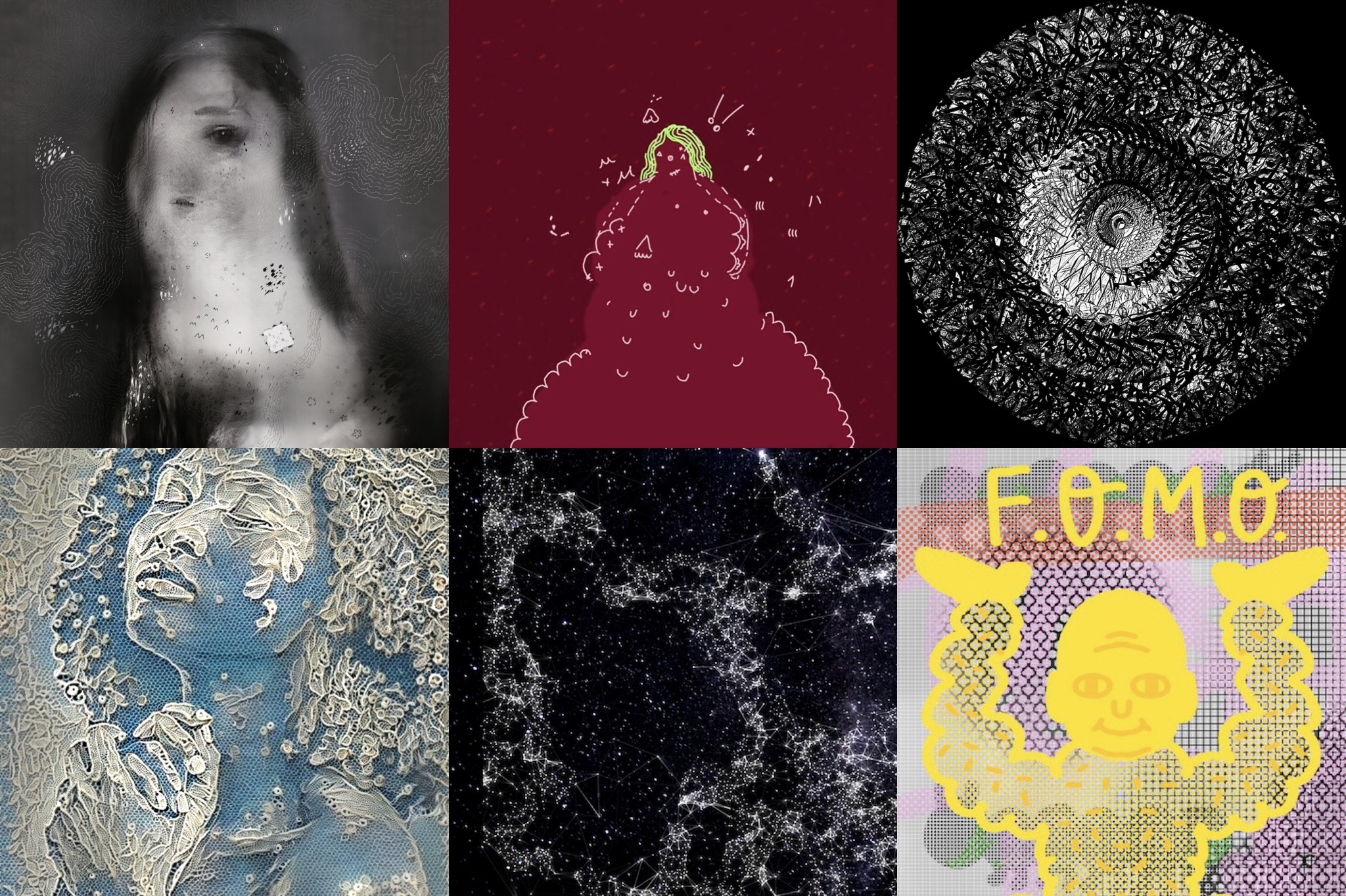 The world of Non-Fungible Tokens can be a whirlwind of colourful movements and sleek graphics, a never-ending scroll of creation after creation that leaves one spinning with the multitude of art on offer. Electric Artefacts has selected some of the favourite works from its collection, and beyond, of artists actively innovating on the new platform Hic et Nunc, by Rafael Lima.

Good luck going down the rabbithole!

“After Her CalmWafer™ Installation” is the first collaborative work between the artists James Paterson and Mario Klingemann, an inspiring creative already known to our readers.

This object appears as an incredibly cryptic and enigmatic portrait created by voluntarily misinterpreting the input provided by a trained model. The result is a glitched, ambiguous, wet-looking and almost impalpable entity staring at us. Both authors use the term “lobotomized” in talking about the outcome as if to underline the capacity of manipulating systems and how the process of mutual exploration with machines can lead to unexpected, or even subconscious, yet extremely triggering results.

“Generative Adversarial Spirograph II” is an AI art piece realised by Helena Sarin. Sarin is a visual artist and software engineer focused on the investigation of cutting edge technologies, an interest nurtured by working at the pioneering centre for research and development of computer art Bell Labs. (It was at Bell Telephone Laboratories, Inc. at its Murray Hill, NJ facility during the 1960s that the first experiments in computer art and artistic animation were done).

Sarin started her creative career by producing analogue works until she approached GANs (Generative Adversarial Networks), which can be intended as machine unsupervised learning models. The use of such a generative tool leaves room for unpredictability and surprise in the outcome, and this factor is one of the artist’s primary sources of inspiration.

Generative Adversarial Spirograph II is an example of Sarin’s practice, and the viewer is confronted with a shape that offers countless interpretations giving voice to what is latent in the image.

“Raspberry Gram Knitting” is a 24 frame 2000x2000 GIF and most importantly - a Genesis NFT piece by James Paterson, a Montreal-based creative director, animator, and technologist (mentioned earlier). Paterson has worked on projects for a diverse range of brands and people including Google, Björk, Mick Jagger, Sony, Burton and Nike.
‍
“Raspberry Gram Knitting”, with its almost childlike imagery, represents a character stuck in a perpetual loop. The fluid movements seem caused by gusts of wind that shake the limbs of this raspberry-red entity. Colour seems to play a fundamental role, and the visual uniformity of this moving image is broken only by touches of acid green pointing out the core of the piece. The playful character of the work perhaps reflects the author's inclination towards a ludic approach to the use of technologies in the creation process.

“FDC FOMO" is an  illustration by FORA DE COMPASSO, a Brazilian artist focused on illustration, painting, comics, graffiti, animation. The image states in a vivid yellow font “F.O.M.O.”, an acronym that has now become part of our everyday language and which stands for “fear of missing out”. The anxiety is real these days with the “drops” and “giveaways” within the NFT space taking place at every corner. The artwork captures the fear of being excluded from activities, a feeling certainly augmented by social media.“FDC FOMO" mocks the rampant attitude with a light-hearted aesthetic, but at the same time emphasising what is becoming more and more a shared social phenomenon.

A peculiar twist on the possibilities NFTs offer is brought by Adam Eivy, a programmer focused on creating experimental code related art. Eivy is the artist and author of “Eliza: The First AI NFT”. Eliza is a replica of a Rogerian psychotherapist and, as the title suggests, the first AI minted as an NFT. The artwork offers anyone to type their thoughts to the AI and receive responses in return. Amidst all the thriving programmable art within the NFT space, this certainly deserves a distinction.

The Rogerian approach is a form of humanistic method in psychotherapy defined as person-centred. The patient takes an active role during the sessions, by deciding what is to be discussed. The therapist’s aim is to facilitate a positive climate for opening up for the client.

Eliza lets, in fact, the user free to engage in dialogue and follows the flow of submitted inputs with instant responses. The conversation proves to be so witty and perceptive that, for a moment, the interlocutor gets uncertain whether a bot or a human sits on the other side of the screen.

“Panzer Dragoon 1k” is a video game minted as an NFT by Gaëtan REnaudeau, a French developer and creative coder interested in experimenting with GLSL shaders, rust and fountain pens robot plots.

The piece is a remake of an old game realized by REnaudeau, which used the concepts present in the famous video-game series “Panzer Dragoon”. “Panzer Dragoon 1k” is in the format of 1k of JavaScript embedded into an SVG (Scalable Vector Graphics). The graphic shows basic colours and simple geometric shapes such as moving circles and squares forming a flying dragon, almost as if not to distract from the main goal of the game itself. The task is simple and straightforward: lock your enemies and shoot, with the implementation of leftward movement to activate the “bullet mode”. It is curious to notice how a modern remake provides a visual impact with retro traits, a sort of reverse renewing process.

"Portraits of Imaginary People” is a series of algorithmically generated works by Mike Tyka, already well-known by Electric Artefacts’ readers. He’s a multidisciplinary artist and author of deep neural net artworks based on the use of DeepDream and GANs. The portraits are realised by training a neural network to create images of people that do not exist in the real world. To do so, a substantial number of photographs taken from Flickr are processed by a GAN machine-learning program. The titles of the works are taken from one of hundreds of usernames of Russian twitter bots which were active during the 2016 US election. Parts of the series were previously exhibited at the Museum of Contemporary Art in Los Angeles, and discussed in articles in Forbes and Fast Company.
‍
In a previous article Electric Artefacts dove into Tyka’s reasons for choosing to mint on Hic et Nunc, the platform being a greener alternative to others.

“orison” is a work by Nettrice R. Gaskins, an African American digital artist, academic, cultural critic and advocate of STEAM fields. In her practice, she explores how to generate art pieces through the wide use of algorithms and coding. Gaskins is also interested in techno-vernacular creativity and Afrofuturism, a philosophical approach that investigates and addresses themes and concerns of the African diaspora through technoculture and science fiction.

“orison” is realised by using a machine learning program and depicts a portrait of a young girl absorbed in her thoughts or perhaps in what might seem an act of prayer. The combination of technologically advanced tools used as media and the final effect with its vintage character offers an interesting contrast. The lace as a material does not seem to belong to the sphere of the virtual, as it refers to the culture of the handmade, yet the two worlds are brought together in a delicate and poetic dialogue.

Joanie Lemercier is a visual artist and climate activist, author of “Pantheism: Star chart 1”. Lemercier inspects the ways in which projections of light in space influence our perception. His interest in how these phenomena relate to physical structures such as geometric forms, patterns, and minimalist shapes lies at the very core of his practice. This specific work consists of a map depicting a portion of the sky, reproducing a pattern arisen from a tessellation of selected stars. The structure emerging between the stars provides the viewer with a view of potential constellations.

The beauty of the work lies in its contemplative and immersive character, just as before a night heaven vault in which the sense of perception is nurtured by the interconnected structure of celestial bodies as a whole, rather than by a single node.

Diane Drubay is a French artist and Founder of We Are Museums, who works with a plethora of mediums to explore “nature-infused futures”. Her latest work consists of a series of colourful orbs, imaginary planets whose colours were made capturing the spectrum of colours in the sky. Drubay often takes elements from nature and reshapes them to form man-made natural presences. So too, in the work shown above, which was made out of a piece of Icelandic landscape. Her fascination for light and the way it paints our surroundings echoes through on each piece of hers that appears on our lighted screens.


Interested in building a collection of your own? Check out our beginners guide to buying on Hic et Nunc here.