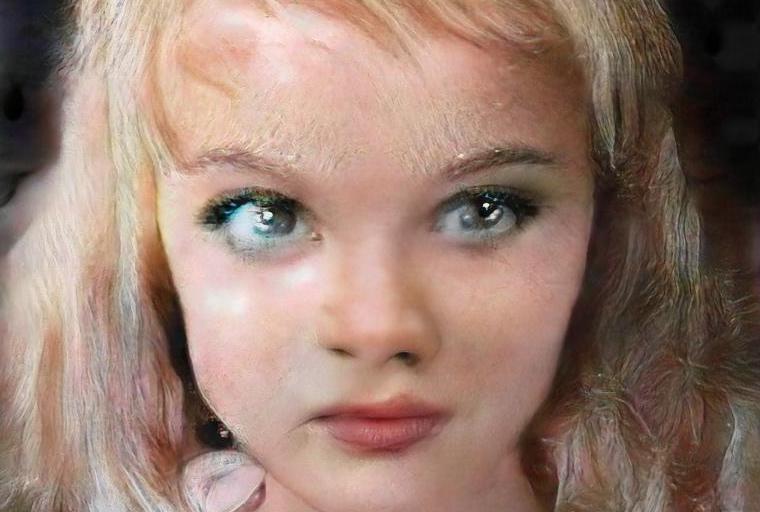 While first voiced back in December by environmental artists, concerns surrounding the ecological impact of Non-Fungible Tokens came to a complete stand-off last week. With articles attacking and explaining NFTs constantly being published in defiant response to each other and more and more artists publicly getting involved with the issue, even bringing the launch of online art platform ArtStation’s NFT drops to a halt after outcry, the polemic seems to have reached a watershed moment where artists are being asked to take a stand. In its tides, AI-artist and researcher with a PhD in Biophysics, Mike Tyka has come to land atop the peak of mount Hic et Nunc: one of the alternative NFT-marketplaces ringing in a new era. In Tyka’s first ‘drop’ in collaboration with Electric Artefacts, he releases works from his renowned ‘Portraits of Imaginary People’ series, featured in Artur I. Miller’s book The Artist in the Machine, along with three new video loops.

Much has been written already on the data and technological minutiae in the debate surrounding the energy usage of NFTs. Complementing these numbers, this article will zero in on one artists’ considerations and their significance for the wider value of new media art.

As a multi-disciplinary artist and scientist working in digital and physical media, Mike Tyka created some of the earliest deep neural net artworks using DeepDream and Generative Adversarial Networks (GANs). Tyka joined Google in 2012 to work on a neuron-level map of the brain tissue of flies and mice using machine learning. Having previously worked on projects melting heavy science with the arts, Tyka sought out ways of bringing the “hidden beauty” in his everyday work to a larger audience. As a result, he co-founded the Artists and Machine Intelligence program at Google that now brings together artists and engineers to realize projects using Machine Intelligence.

The latest in Tyka’s own work with GANs is a series of portraits that are the product of feeding thousands of pictures taken off Flickr into a GAN to create "Portraits of Imaginary People". Previously shown at ARS Electronica in Linz and Christie's in New York, it is currently part of the Electric Artefacts x Umanesimo Artificiale group-show Uno, Nessuno, Centomila. Tyka set out to create the series after seeing a pattern in AI-technology:

“what struck me when observing all these present-day trends and novel techniques was the deception of identity at their very core. Historically, humans have always been able to easily verify someone's existence by interacting with them face to face. Nowadays, because of the disjoined way that we experience others' accounts on social media [...] these fake accounts don't have to be particularly sophisticated to appear real."

His words ring true across the various opportunities for miscommunication and duplicity the internet has given us, from phishing to misinformed cancel culture. But the context that Tyka is referring to specifically is the alleged success of Russian twitter bots active during the 2016 US election. Indeed, the titles of the individual portraits in the series were taken from these very bots. We find “Uliabelushiva” or “JoshuaSpence88” staring back at us in embodied anonymity, their existence not any less real despite their digital nature. Linking perceived reality with lived existence, Tyka points out:

“any collective belief, be it religious, economic, or political, can effectively become ‘real’ if that fictitious entity affects the actions of the collective. In that sense, these imaginary people who express their views on social media really exist in the same way that deities do.”

Tyka’s work speaks to the malleability of our (technological) creations, and the responsibilities that follow from this. Technology may have the capacity of decontextualizing, disembodying, and complicating matters to a point where we seem to lose interest and control. At the core of Tyka’s work stands a desire to bring back meaning, to give just enough of an explanation to give us a reason to be interested, and see beauty in the previously opaque.

Therefore, when the time came to discuss the option of releasing the series as NFTs, the significance behind vast aggregations of symbols, and their possible repercussions, mattered. For Tyka it was “obvious that minting NFTs on the Ethereum blockchain was not an acceptable option”. He explains his decision saying: “engaging in Ethereum would wipe out years of trying to reduce my personal climate footprint at the click of a button.” This disconnected contrast between click and consequence is exactly where our problems seem to exist; technology’s apparent capacity to obscure the things at the center of our conversations. It is easy to lose sight in a sea of unspecified numbers or faces, especially when their tangible outcomes are so far away from our lived reality; “quantifying and specifying the impacts and sharing information is critical.”

And this is precisely what Tyka does, both in his realization of "Portraits of Imaginary People”  and his choice to mint on Hic et Nunc, a platform run on the Tezos blockchain. While functioning on different plains, in both instances he identifies and zeros in on the individual level. He makes concrete the fact that these tech-driven seas of data aren’t actual deities, but currents and waves we ourselves control. One of the purported timeworn purposes of art, if it’s even meant to have any, is to offer a reflection of existence, a masterpiece set to remind us we are but one amongst many. If we as entities can have this consciousness, it is our responsibility to care for it through choosing sustainable options. Art or technology, new and old.

Previously unreleased works from Tyka’s "Portraits of Imaginary People” are now available for purchase. You can follow this guide to get yours before they fade!