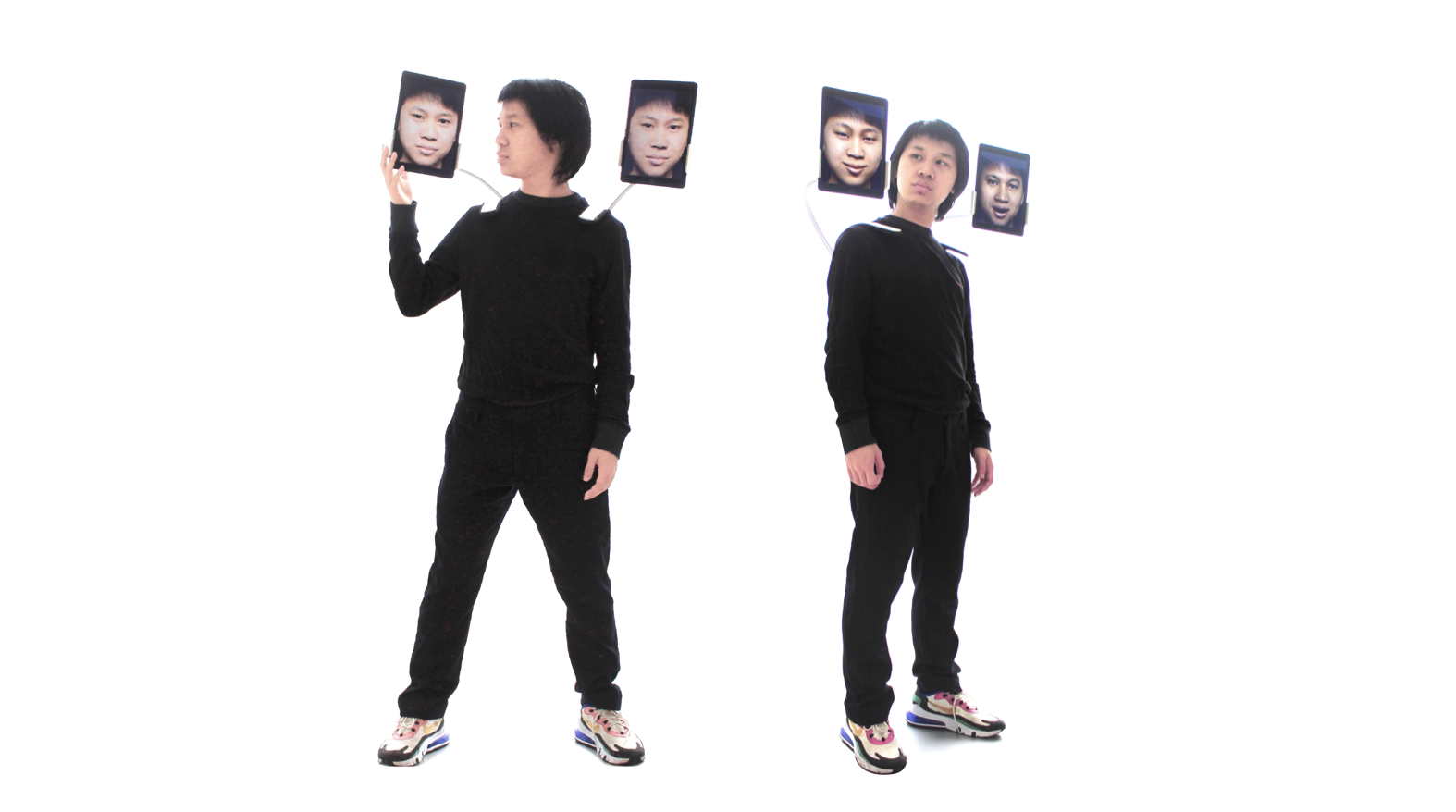 Machinoia : Machine of Multiple Me
,
2019
BUY NFTHow to Buy
$ 0 USD
Size:
×
×
cm
Duration:
Unique work
You already added this artwork to your cart
Presented by
Umanesimo Artificiale
ABOUT THE WORK

Our body and mind relate in ways which are extraordinarily enigmatic and seemingly incomprehensible. Recent findings exemplify this by showing not just that ours minds can inhabit multiple bodies but also that the body can be shared between multiple minds. As an exploration of this concept, we present Machinoia, a symbiotic augmentation that corporealizes into two bodily extended heads: who you once were, and who you'll eventually become. We used a generative adversarial network to synthesize life-like human faces and controlled them through artificial attitude models extracted from social media data of its wearer. Thus creating "artificial personal intelligences" of the wearer, bringing to life past and future versions of oneself. In doing this, our work aim to challenge the human-machine dichotomy that seems to underly most of human-computer interaction, and emphasize integration over interaction.

As we are dependent on our heads to think and be alive, soon we might be just as dependent on our technological counterparts. In a way, Machinoia then exemplify both a critique and praise of this human dependency on technology, which seems to have many positive and negative consequences, questioning whether we in the future will see ourselves as a species that is reliant on machines or as a new breed, "Homo Deus", Human Gods, endowed with a mix of artificial and human abilities.

-
‍
Pat Pataranutaporn
Pat Pataranutaporn is an anti-disciplinary technologist/scientist/artist at the Massachusetts Institute of Technology (MIT). He is part of the Fluid Interfaces research group at MIT Media Lab, which specializes in designing on-body technology for human enhancement. Pat's research is at the intersection of generative artificial intelligence, synthetic biology and wearable computing, specifically at the interface between biological and digital systems. Pat's research has been published in IEEE, ACM SIGCHI, ACM SIGGRAPH, ACM ISWC, ACM Augmented Humans, etc. He also serves as reviewers and editors for IEEE and ACM publications.
‍
Valdemar Danry
Valdemar Danry is a visiting student from the University of Copenhagen in Denmark. His passion is the intersection between philosophy, technology and arts, more specifically the relationship between body-borne technology and experienced consciousness. With his background in design, phenomenology, virtual reality, augmented reality, and art he seeks to explore how the augmented body mediates our experiences of the world not just as something physical but as something which is ""lived"".

Pattie Maes
Pattie Maes is a professor in MIT's Program in Media Arts and Sciences and until recently served as academic head. She runs the Media  Lab's Fluid Interfaces research group, which aims to radically reinvent the human-machine experience. Coming from a background in artificial intelligence and human-computer interaction, she is particularly interested in the topic of cognitive enhancement, or how immersive and wearable systems can actively assist people with memory, attention, learning, decision making, communication, and wellbeing.

Pat Pataranutaporn
Pat Pataranutaporn is an anti-disciplinary technologist/scientist/artist at the Massachusetts Institute of Technology (MIT).
Read Full Bio
Pat Pataranutaporn
is presented by
Umanesimo Artificiale
Video
Inquire ABOUT THE WORK
Thank you! Your request has been received and a member of our team will connect with you on the email provided.
Oops! Something went wrong while submitting the form.