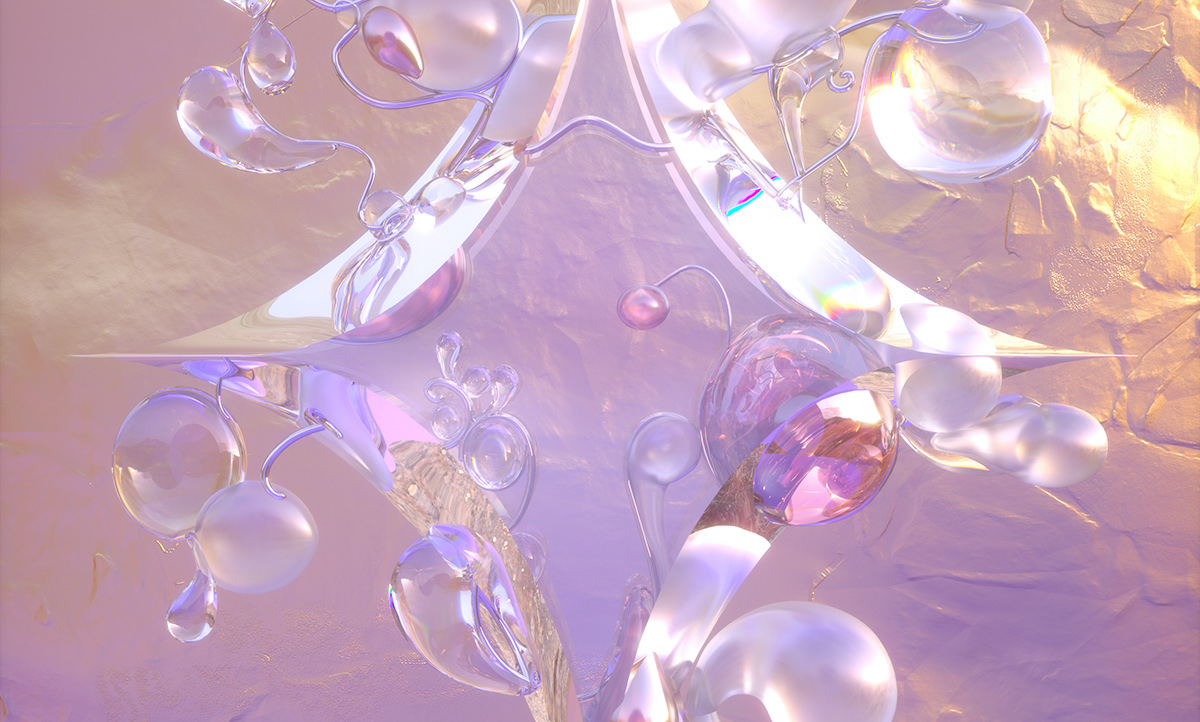 Rachel Noble, a UK based digital artist & designer known for her vivid and recognisable artwork and videos, is one of the selected participants at the Electric Artefacts' Inaugural Show. From DJing on NTS radio to designing for the Spice World tour with Studio Moross, her love of music immerses her in both popular and underground culture. Rachel's work often depicts stunning parallel realities, imbued with a sense of weightlessness, reminiscent of underwater or outer space. Some of her recent projects include commissions for Converse, Louis Vuitton and Hypebeast.

In an interview with Electric Artefacts, Rachel shares her story and what inspired her to work with new media tools and technology. We also discuss the future of 3D art as well as the challenges artists face in the ever-evolving digital medium.

‍Rachel, please tell us about yourself and your current practice.

I started working digitally in 2009 - I had moved to London to study Fine Art at The Slade just before the recession hit in 2007. During my time there, I started feeling overwhelmed by the thought of building a practice that would require constantly spending a lot of money on physical materials and studio space, with everything rising in price. Working digitally seemed like a much more sensible path in which to invest my time learning and developing new skills. I also loved the feeling of being able to make work literally anywhere - I remember one of the earliest digital collage pieces I was making was so labour intensive I did a lot of that work from my bed in the evenings after being in the studio all day.

"Working digitally freed up my experimentation from a tentativeness and preciousness I found I had whilst using physical materials."

The digital medium allowed me to bring in an explosion of colour - my previous work was incredibly subtle and sensitive.  Working digitally allowed me to be bold and have fun. I was also really obsessed with the kinds of intensely vibrant colours you could do and thinking of screens and light as a medium in and of itself.

I started with digital collage, which developed into art and animation that began to take on a more 3D look, so learning to use 3D software was a natural progression and still allowed me to include things like 2D textures, photographs and videos I would be making too. I loved the idea of being able to create stuff you literally couldn't make in the real world, or not without a huge team or budget. It also allowed me to make an income by generating work for other people - like making music videos, cover art and poster design. Working in 3D provides me with limitless potential and inspiration, and in addition to colour-play, I love the stunning textures, shapes and lighting with which you can experiment.

How do you see the technology changing, what potential do you think it has?‍

Other than things speeding up in terms of workflow, I can see a more streamlined, intuitive creation process becoming a reality. For example, the process can mean a more direct and interactive approach to creating digital 3D work such as using VR and feeling like you are in the software itself, making things with your hands and your body.

"I also hope the aesthetic of 3D art, in general, will get more individual and unique - at the moment so much of the work I see looks like it could have all been made by the same person."

There will also be a lot of blurring between what is real and what isn't real, and similarly, a merging of the real and what isn't real! I think the way people create art, experience art, and acquire art will change - more people will own digital art, and the artworks themselves could be more interactive or change and update over time. Imagine a piece of artwork you have a subscription to, and it exists in a digital format and develops as the artist develops too, or it could even be something that responds specifically to the owner, like a mood ring!   ‍

Do you feel a sense of distance between artists working with the digital medium and others?‍

My initial reaction was yes, but thinking about it, I'm not sure I do actually. I feel as though I am closer to a traditional artist in that I'm still making images as a painter would. I'm working with 3D forms like a sculptor, cameras and lighting like a photographer or filmmaker, colours and textures like a painter. And more and more, I am witnessing the direction of art x tech seeing the importance of incorporating the human touch and the real and the physical again - like a rejoining of two worlds.

There's so much potential for collaboration with traditional art and technology too, even if it's in the most literal sense - such as viewing your painting in a physical space using AR. Plus, a lot of early experimentation with technology in art was in the context of traditional fine art practice, so it has been present for a long time now. But the art world itself does seem largely behind in terms of how people experience and acquire art. In taking on new ways of exhibiting, experiencing and selling art, and the kind of artists, traditional galleries choose to represent. It also depends what is meant by the term 'traditional artist' - for tech is just another medium in which artists are exploring all possibilities and potential uses - something that traditional artists have done with their own medium for a long time. So maybe things aren't so far apart as they may appear.

‍What would you say is the most challenging part of your practice?‍

Probably getting the technical side of my knowledge up to speed to match the things I want to create in my head. It was such a steep (or maybe just frustrating) learning curve initially. When I started I felt incredibly isolated, there was barely any practical support or advice available online - and being self-taught, I have spent hours upon hours trying to solve the most seemingly simple yet frustrating problems. Lighting is also something I am yet to feel totally in control of.

"Juggling a creative practice, health and wellbeing, and the pressure of making a living and the tendency society has to push overworking as the norm, along with a perfectionist nature I have is a whole cocktail of difficult too."

I think many 3D artists share similar struggles - long hours working alone, solving technical problems by yourself and always running into one annoying issue that halts your entire project until you tackle another level in your knowledge and skillset. I used to want to make everything myself, so it's been hard to accept that sometimes you have to use assets that were made by someone else, it's not possible to model everything from scratch all the time!

Tell us about the work you chose to exhibit for Electric Artefacts.

"The work I made specifically for this show acted as a kind of sanctuary in which to explore where I am currently at in my life and creative practice, a space to express my inner world of feelings, emotions and desires, and to combine that with my visual aesthetic. It is a reclaiming of my own voice as an artist and not just a designer."

The works combine sensitivity with strength and protection, vulnerability with beauty, and held a place for play and experimentation - and a relief from the pressure of the design side of my creative career. I have also begun to include more of my own hand in the works than I usually do when designing - working from initial sketches and retaining some of the hand-made forms and lines to create something a lot more personal and intimate.

How did you come into your unique aesthetic?‍

Through years of doing work, collaborating with people, a lot of play and experimentation, developing my technical skills and knowledge, writing, looking at the world, collecting visual stimuli, doing a lot of inner work and questioning why I make art in the first place regularly. Working in 3D has such huge scope too - it lets you include anything and everything and has so much potential visually.

Rachel Noble's work is exhibited in the online Inaugural Show until the 24th of November! You can visit it here.