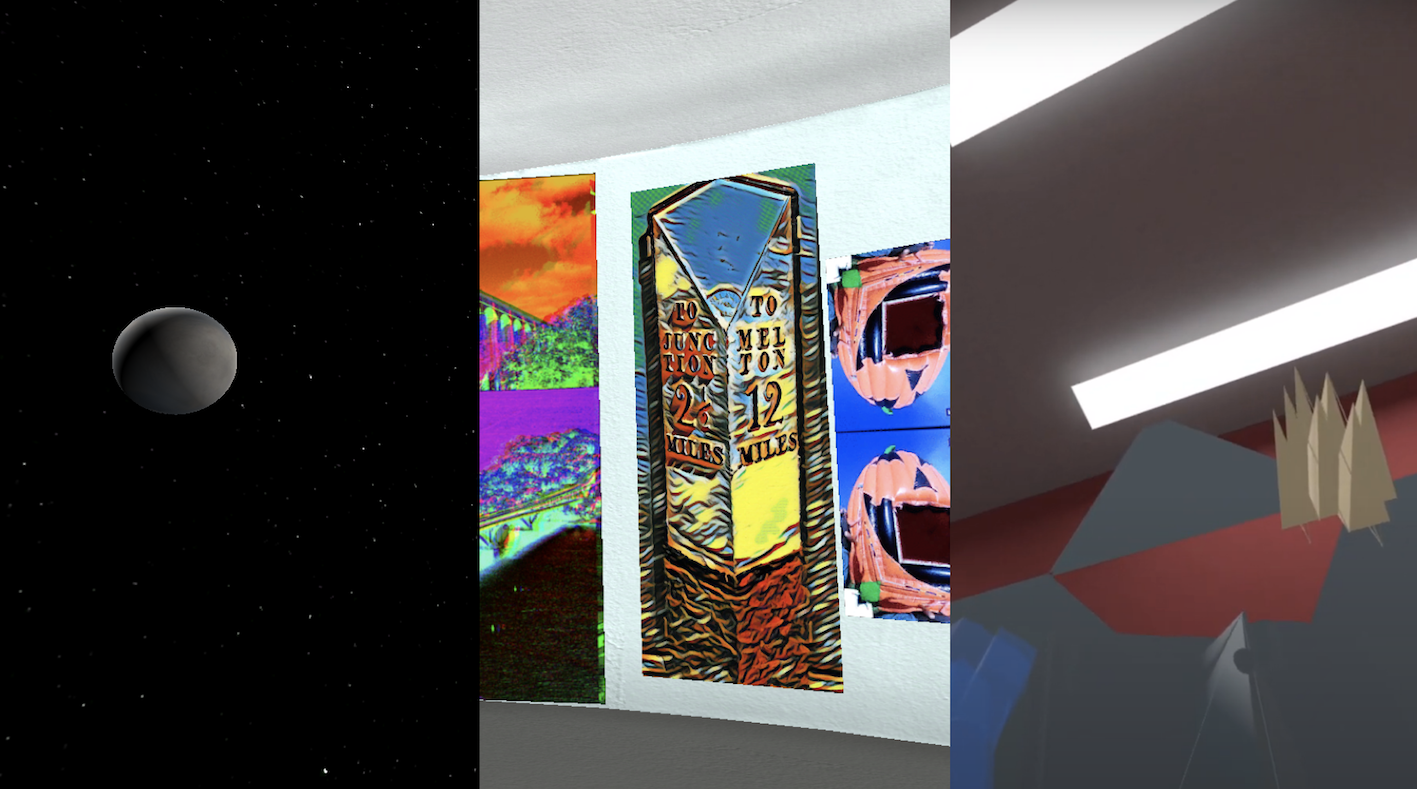 As promised, we hereby bring you part two of our journey past the final projects of the Digital Art Observatory (DAO #DAObservatory). Last week we covered the work of Roksolana Dudka & Krisztina Kapeljuh and Oliver Jenkinkins & Julia Shutkevych, this week we focus on the next three projects.

Before we set off, a quick recap of what the DAO project entails. Created as a research residencу between the UK and Ukraine to study collaborations in the digital world, DAO set out to examine the practical as well as the conceptual problems and possibilities of a cross-cultural creative digital collaboration. The exhibition One Out of Many is the visual outcome of that exploration.

Continuing our voyage, we are shot into outer space to examine what our personal narratives and worldly possessions look like from the highest strata of our globe. Veritas, constructed by Isabel Bonafe & Julia Beliaeva, asks us to put things into perspective. Though we could write endlessly about the various artefacts circling our existence, we’d like to present this report written by the artists themselves, sent to us while they continue their mission to Venus:

The Earth is not beat yet, but figuring out the possibilities of life under a high concentration of gases is urgently needed.

A mission to Venus, the called Earth's sisters planet, has been launched. The runaway greenhouse effect in Venus seems to be a cautionary tale to our planet. As scientists suggest that Venus is an early Earth, the mission Veritas will study Venu's past and present geological process, from its core to its surface, and the possibilities of living in the thick cloud decks that shroud the planet. That gives some hope for the future, and awareness to change our behaviour for the new beginning to come.

Phase I: A cosmic gift of an accident

Crossing the upper limit of our atmosphere an extraordinary event happened. Space debris in low Earth Orbit (LEO) seems to be compounded by something more than defunct artificial objects. Sparks of the past, disconnected fragments of memories are suspended in the immensity of the Space: forgotten personal and collective memories have been fossilised as asteroids.

These fossils, under the effect of the Kessler syndrome, collide between them creating more debris, which in turn create more collisions. These crashes are memory triggers and agents that rouse, change and intertwine an amalgam of latent memories.

During phase I of the mission Veritas, the astronauts have discovered the cosmic dust of the human memory.

Returning back down to Earth, this collaboration between Robert Richardson and Pavlo Bestuzhev is a presentation of online information about both the Ukraine and Britain. The concept was to apply an artist’s autonomy and creativity to what are often bland representations of our countries and their cultures, think of top results of Google searches and tourist leaflets. In addition to working at the level of the two countries, it was also decided to focus on the two places where the artists live. This gave scope for an interesting contrast, since Bestuzhev lives in a large capital city, Kyiv, and Richardson in a small market town in the English midlands, Melton Mowbray. The initial engagement with mass media involved both artists sharing screenshots relating to their geographical, historical and cultural surroundings.

During the collaboration, Bestuzhev uploaded a folder of photographic images he had taken while walking in Kyiv. This prompted Richardson to produce a folder of photographic images of Melton Mowbray. Through this visual research, another line of artworks emerged that related to the built environment, architecture and history. The contrasting images of a church in Kyiv, photographed by Bestuzhev, and the one in Melton Mowbray, photographed by Richardson, led Richardson to digitally and graphically manipulate them for the production of artist’s videos.

Arriving now at the last project of One out of Many, we end on a poetic note and connect with the intangible aspects to culture. With Lost and Found Services James Johnson-Perkins creates a virtual space for special things that have been lost in time. On display are works of art that have been stolen or lost in the annals of time, bringing into question the ways in which we construct narrative around objects. Do we assign value to art and culture through the stories we tell about them, or do their physical presence contribute as well?

As custodian of this space, Johnson-Perkins gives us the chance to view and retrieve precious items, such as: the fabulous ‘Portrait of a Young Man’ by Raphael, the legendary Japanese swordsmith Goro Nyudoo Masamune’s ‘Katana’, a section of Leonardo da Vinci’s fabled ‘The Battle of Anghiari’ and the Baroness Elsa von Freytag-Loringhoven’s illustrious ‘God’ readymade. Lost and Found Services also offer the chance to retrieve personal items like memories and keys, and long-lost treasures that you thought you would never see again.⁣