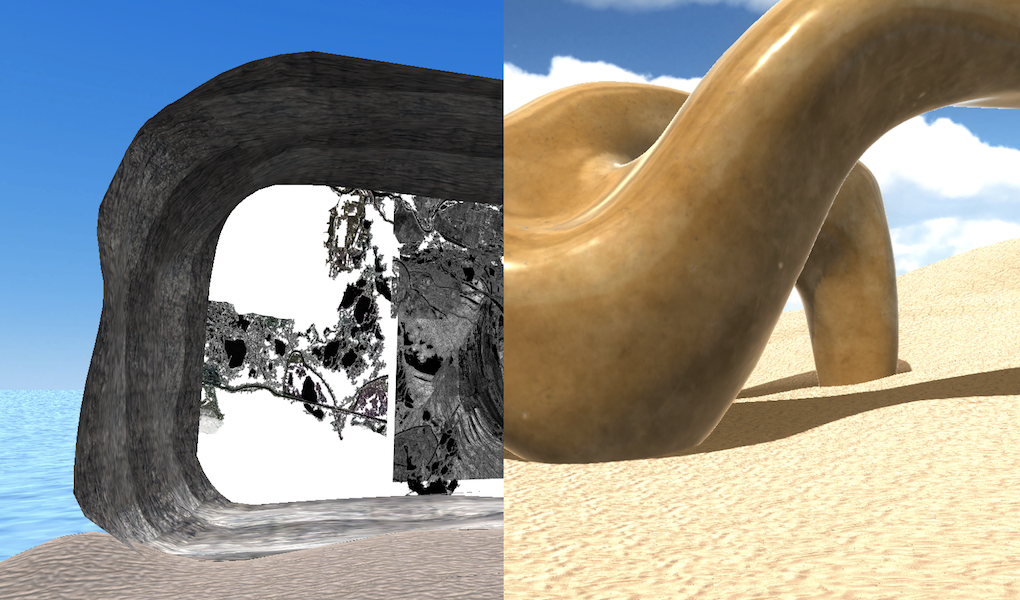 Let us tell you the tale of the Digital Art Observatory (DAO #DAObservatory). Created as a research residencу between UK and Ukraine to study collaborations in the digital world, the project involved multiplicity of outcomes such as a series of public talks, a whitepaper and a final exhibition of final projects by its participants. The residency began at the end of summer 2021. Artists were paired up, each team counting one artist based in Ukraine and another based in the United Kingdom. The residency’s mission was twofold: to look at the practical as well as the conceptual problems and possibilities of a cross-cultural creative digital collaboration. The exhibition One Out of Many is the visual outcome of that journey.

The questions underpinning this exploration of what an international artistic project can look like in this day and age, all revolve around issues of communication and translation. How does one switch between different languages? What do geographical location and cultural context mean, the moment that they enter a digital arena? Did it matter that the creators of the works exhibited in One Out of Many found themselves in different worlds? What happens to the specific cultural context that something is from, when it is placed amongst the multitudes of decontextualized fragments of visuals, narratives, identities and data of a much larger whole - the internet?

The projects that ensued all relate to notions of sharing space, of dialogue between different stories - and the ways in which the digital realm facilitates these. In this article we’ll be travelling past the first to projects of One Out of Many.

The first project of the exhibition highlights different ways of approaching cultural heritage and its perception through technology. One interpretation of these being Roksolana Dudka’s Tree of Life, and the other Krisztina Kapeljuh Dabube.

Dudka created a stage with three-dimensional and moving elements, revolving around the symbolic "Tree of Life". According to many of the world’s mythologies, the tree of life is the center of the universe. It unites all worlds into a single whole, symbol of eternal earthly life calling for a rebirth. It’s also a symbol of family and connection with our ancestors. Germinating, it grows and branches out, bears fruits, and thus gives life to the next generation - beginning a new life cycle.

Contrasting this view, Krisztina Kapeljuh explores fragmentation. Using satellite images of the Danube, Kapeljuh explores the meaning lying in the seemingly "inanimate planes", the pixels, of the great river. Juxtaposing what is but a tiny dot on a map or screen with the power and significance the Danube has for geography and cultural identity, Kapeljuh pulls into question the ways in which we assign meaning: “what is an anchor for a person's perspective is just a pixel on the map for the global process."

As such, this idea of heritage resonated deeply between the two artists and in their collaboration, albeit in different ways. Dudka stands on her cultural roots proudly, firmly. The culture is here as soil for the flourishing of her artistic endeavours and aspirations. Kapeljuh, on the other hand, finds herself entangled in questions around the meaning of cultural roots in contemporary space. How do we find and define our cultural identity in the modern world?

Building on this idea of finding a sense of belonging, the next project, by x-89 and Neometa, goes deeper into what happens when various miscommunications and misunderstandings take place.

Surface Thoughts is a result of merging traditional art pieces with digital art techniques. The two artists assembled an extensive bank of referential material, each borrowing from colleagues in their respective countries who struggled with issues around mental health. They then proceeded to develop independent algorithms which fed on these visuals, processing them, molding them, forging something new.

From the themes brought into focus by the referenced painters to the way the final presentation is conceptualised, psychological wellbeing is a running thread. Though, perhaps, a more illuminated topic in Western Europe, discussing mental health remains a taboo in Ukraine, with mental illness carrying a consistent stigma across the board. The way both participants cultivated each a unique visual environment to inhabit their shared virtual reality reflects both the disparity of cultural and unity of human experiences.

Surface thoughts are something constant and mundane, our loyal satellites. They matter so little, carry so much - and vice versa, simultaneously, always. A mercurial vortex concealed beneath the layer of our skin, inside the labyrinthine cradle of our skulls; laying under our feet like a dormant volcano, a lost city, a hidden treasure. A sleeping mine you triggered by one step too far.

Similarly, mental illness is a constant presence. Those who live with it can never really forget. But its noise, paradoxically, often blends into the background of one’s life. Never seen, made to be hidden, yet always right there, under the surface. All you have to do is look.

Stay tuned for part II of the Artist Residency Guide, in which we will be looking at the work of Isabel Bonafe & Julia Beliaeva, Robert Richardson & Pavlo Bestuzhev and James Johnson-Perkins!