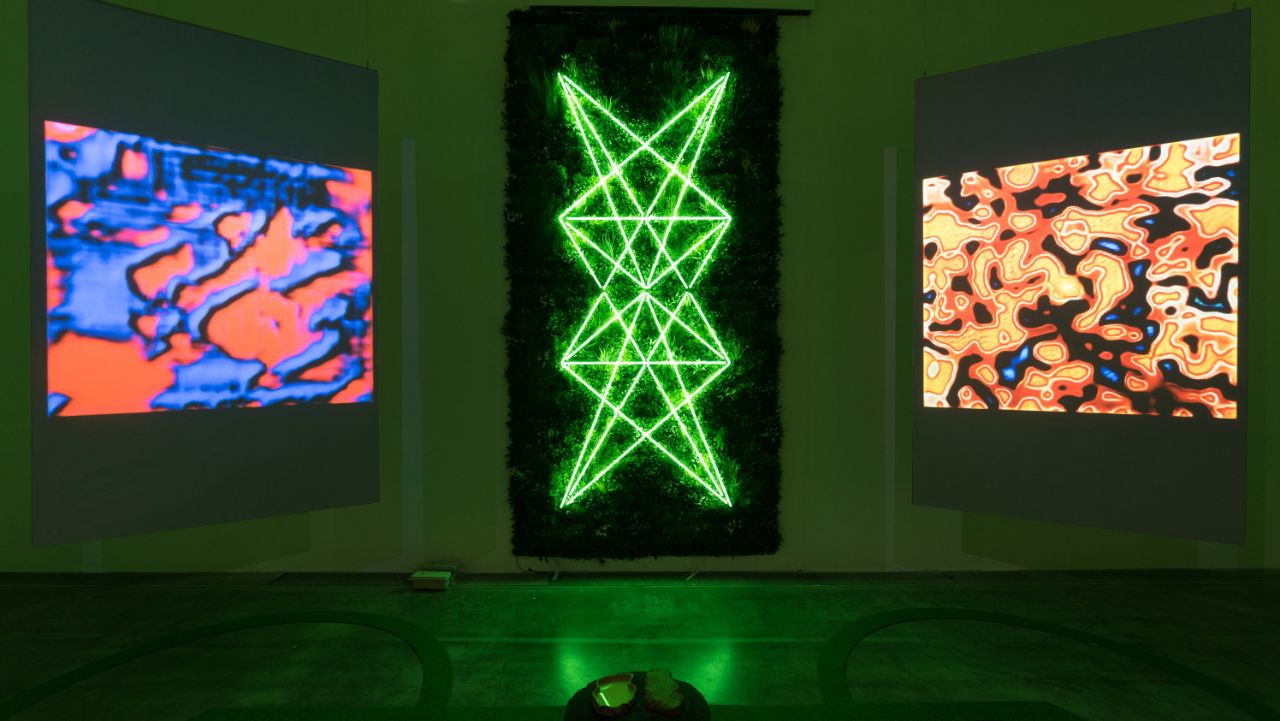 7 Exhibitions That Changed the Landscape of Digital Art

In the early 1950s Desmond Paul Henry purchased a WWII Sperry bombsight computer from an army surplus warehouse. A polymathic lecturer of philosophy, Henry’s purchase of the analog machine so inspired his mechanical mind that he sought a way to capture its internal motions on paper. By 1960, he had modified the bombsight computer into a drawing machine, which mapped complex curvilinear abstractions in a way quite different to the dominant programming logic of his early computer art peers. While they showed some semblance to the kinds of images produced using pendulum harmonographs and geometric lathes, there was nothing predictable about the outputs of Henry’s machines, which could create wildly different drawings depending on the tiniest adjustments, and would respond to spontaneous input by the artist midway through the process.

Henry's artistic career was launched when he won a local competition in 1961. The prize for winning this competition was an exhibition at the Reid Gallery in London. It was at this show—Ideographs (1962), that Henry’s machine-generated art was publicly displayed for the first time. Thanks to Ideographs, Henry’s work was featured on the BBC and he became an important figure in the burgeoning field of computer art.

The bombsight computer being an analogue machine, Henry’s early work was not properly digital. Credit for the first digital exhibition goes not to an art gallery but to the University of Stuttgart, where the doctoral candidate, George Nees showcased some of the first computer generated artworks, plotted using a ZUSE Graphomat Z64.

Nees cut his teeth as a programmer working for Siemens in the 50s before starting his doctorate at Stuttgart, where he wrote one of the first theses on generative computer graphics. Later in the year of his first show at the University, Nees would exhibit his works alongside other Z64-plotted pieces by Frieder Nake. Both men were enrolled in the  philosophy department where they studied under Max Bense. Like Nees, Nake had a background in mathematics and computer science, and many of his works used digital programming to visualize abstract mathematical principles. As with other artists that get labelled algorithmic, Nees and Nake argued that the art was not the line drawings turned out by the plotter, but rather the programme that the plotter executed.

Cybernetic Serendipity: the Computer and the Arts, Institute of Contemporary Arts, London (1968)

Cybernetic Serendipity was the first attempt by a major institution to map the new landscape of computer arts. Featuring works by Henry, Nees and Nake, as well as Wen Ying Tsai, Vera Molnár, Nam June Paik and a host of other artist-scientists working at the cutting edge of the digital revolution, the event showcased not just computer-generated graphics, but animations, poetry and music, as well as cybernetic machines and environments.

After a successful stint in London, the exhibition went on to tour the United States, where it’s techno-utopian frequency resonated especially with the west-coast countercultural scene. As both art show and tech demo, Cybernetic Serendipity reached an audience of hundreds of thousands and had a lasting impact on the popular imagination of cybernetics and computing.

If Cybernetic Serendipity saw out the 1960s in a cloud of heady, hippy utopianism, before the dust had settled on the exhibition’s final leg in San Francisco, the Jewish Museum in New York would usher in the new decade with a darker, more dystopian reflection on the world’s new media environment.

At Software, the art was conceptual and provocative. Where digital exhibitions of the 60s tended to envisage the computer as a powerful tool and new artistic medium, as Jack Burnham, the curator of Software would write in the show’s catalogue, the works on display were less concerned with specific digital techniques, but rather dealt with “underlying structures of communication or energy exchange instead of abstract appearances”.

Although it was plagued by technical failures and received broadly negative reviews, Software signalled the maturing of new media art into a properly critical discipline. Reflecting a waning optimism in the public reception of technology, and the changing mood concerning automation, advertising, and the possibility of artificial intelligence, Burnham observed with a note of caution that computers would be “instrumental in redefining the entire area of aesthetic awareness”.

With the advent of personal computers and the first video-game consoles in the late 1970s, in the 1980s digital technology became increasingly ubiquitous. If Nam June Paik, who exhibited at both Cybernetic Serendipity and Software, was the artist who most transported film and television into the gallery, the new ubiquity of silicon equally transported the gallery into our homes and onto our screens.

At first the change was overlooked. From the first videogames, it would be years before the medium was recognized as fine art, but as the internet realized Paik’s dream of an “electronic superhighway” towards the end of the century, artists were among the first to explore its radical potential.

Internet art like Scot Draves’ Electric Sheep (1999), is nothing short of the decentralization of making and viewing art. A project in distributed computing that generates fractal flames among networked computers, which can then display them as screen-savers, Electric Sheep represents net art’s characteristic commitment to a participatory artistic practice.

Of course, the problem with eschewing art-world institutions is that archival work becomes an entirely different sort of task once artworks exist entirely in public-domain virtual worlds. Electric Sheep is sustained by an enthusiastic community of shepherds. It has evolved to include apps for Android and iPhone, and Draves is still actively involved in keeping the project going. But for some net art ventures, the pace of technological change, a lack of funding, interest, or user participation, can lead to stagnation and eventually death.

Enter Rhizome.org, a web-based non-profit supported by Google Arts and Culture and affiliated with the New Museum of Contemporary Art in New York. Rhizome has been a hub of internet art since its inception as a mailing-list in 1996 and it leads the charge in efforts to curate and preserve art that lives on the internet.

Devised by Rhizome's specialist digital preservation department, Net Art Anthology aims to address the shortage of historical perspectives on a field in which rapidly evolving technical standards and the challenge of hosting content in the long-term means even the most important internet-based artworks can become inaccessible. Comprising 100 exemplary works, Net Art Anthology celebrates twenty years of art on the internet by hosting the best of the genre in perpetuity on the Rhizome website.

As was the case with the first digital art exhibitions in the 1960s, when art created by neural networks was first displayed in public, it tended to take the form of a technology demonstration more than an insightful curation. The intention here is not to criticise or demean Google and the Gray Area Foundation’s Deep Dream (2016), or Oxford University’s Unsecured Futures (2019). But five years on, the classic Deep Dream style already appears kitsch and Oxford University’s AI-Da was unashamedly gimmicky from the get-go.

Just as Jack Burnham’s Software did not concern itself with specific new technologies so much as the new questions that they posed, Uncanny Valley does not limit itself to the exhibition of GAN art, but probes the new cyborg assemblages that contemporary AI enacts. Works from such new media visionaries as Pierre Huyghe, Lawrence Lek, and Hito Steyerl ask what it means to be human in a world increasingly organized according to algorithmic governance, AI classification, and inference by data.

From Ideographs to Uncanny Valley, artists working with digital, as well as proto- and post-digital media have embodied some of the most surprising whorls in the flux of art and technology. Their power to surprise stems from the interplay between randomness and design that Desmond Paul Henry described as the “mechanics of chance”. To be surprised is to be provoked. Thinking about Henry’s drawing machine provokes us to ask how technology might have been different—to imagine the computer without digitalism. The artworks on display at Uncanny Valley provoke us to ask how it still could be—to speculate on other digital futures. At the intersection of speculation and surprise, it would be futile to try to predict what the next influential exhibition will zoom in on, what questions it will ask. If we knew that in advance it wouldn’t be art at all.

Cover image by Zach Blas, The Doors, 2019. Installation view of Uncanny Valley: Being Human in the Age of AI, de Young Museum.