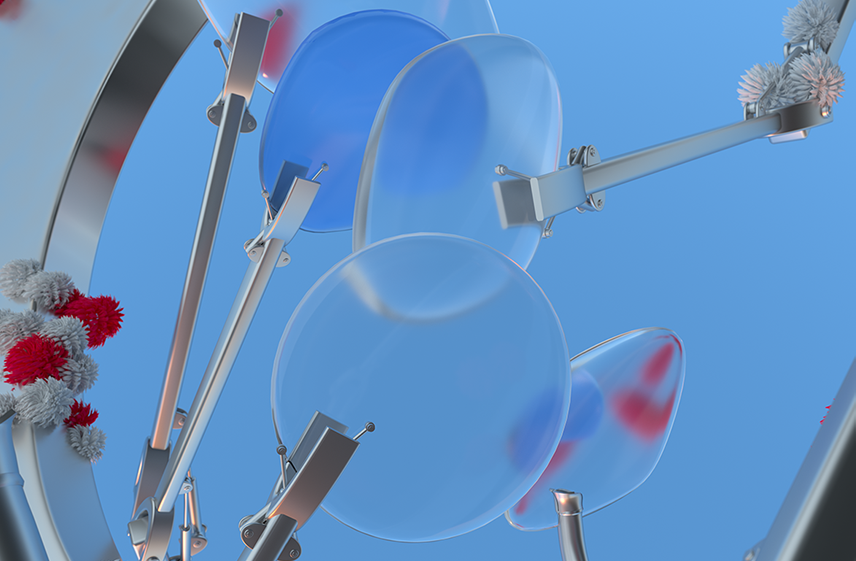 When the Organic and Technological Interact - Julia Kobel on Connecting Disciplines

Julia Kobel is a 3D-artist and designer who creates architectural landscapes in which both the technological and natural find a home. As a recent graduate from the BA Communication Design at Hochschule Mannheim, Kobel’s background covers a wide range of disciplines and mediums. She was fond of drawing as a teenager, and originally set out to become a child book illustrator. Instead of comics or children’s books, her work now features in magazines such as Komma and fn-up, and graces the posters of experimental club nights across Europe. Alongside her artistic practice she also started her own club night Sirens with friends in her hometown of Mannheim.

In this interview with Electric Artefacts we speak to her about her journey from drawing to 3D; about the organic and artificial coming together and how they offer limitless opportunities for today’s world.

Your initial academic career ambitions didn’t start in the digital realm. So when and how did you begin working with 3D-software?

My journey started in winter 2017 when I was participating in a "3D Beginners" course at my university.  Since the beginning, I felt very comfortable with the 3D-software although I was overstrained from its functions and interface. I learned a lot by watching youtube tutorials and experimenting on my own. After a while, it became a self-sustaining process and since then I worked mostly with 3D.

As my studies "Communication-design" include a multifaceted offer of design-disciplines such as photography, illustration, graphic design, film and interaction design, I was able to try a lot of things but nothing caught me like working with 3D.

But these experiences showed me that 3D is very adaptive to other design and art disciplines which makes it even more interesting when it comes to collaborations with other creatives. I think the main reason why I chose to work with this medium is that 3D is a tool with endless possibilities. Theoretically, you can bring everything you can imagine to life.

Do you see these endless possibilities playing a role in our everyday lives in the near future?

Movies, games, advertising, visualization and simulation in different areas like healthcare, car design, or architecture are unthinkable without 3D technology. I think it will just play a bigger role in our life year by year as it already has. The growing amount of free tutorials, render farms, free assets, free plugins, and free 3D-software like Blender that grows automatically by its community and gets easier to handle by each update, makes me believe that 3D will be more accessible for everyone in the future.

Do you feel a distance between traditional artists and those that work at the intersection of art x tech?

I think that every artist has to find ideas, make concepts, learn their craft, find their style, and express themself no matter what kind of art they do and what kind of tools they use. So for me, there is no fundamental difference between artists.

Tell us about the work you chose to exhibit for Electric Artefacts Inaugural Show.

In the beginning, the series “Tragwerk 1/2/3” was planned as a “frame in frame” concept which got modified through the creative process.  Overgrown architectural appearing elements are composing a technical frame in which the transparent and floristic part of the work has space to affect the viewer's attention. A surrealistic nature that needs non-organic material as their natural habitat.

The title “Tragwerk” is a german word for “supporting structure” (architectural) which should, on one hand, symbolize the heaviness of the technical construct in contrast to the lightness the image gets by a luminous blue sky. On the other hand, the construct has the function to carry the flowers, to give them a space to exist.‍

Are there challenges to working with 3D?

Sometimes I feel overcharged by all the different possibilities and applications 3D includes.  I want to learn many different things, get in touch with programs, try out a bunch of tutorials so that I didn't know where to start sometimes.  A feeling of powerlessness that makes me sometimes don't touch my PC for days until I charge my battery of motivation again. Of course, failing is a great thing and a huge part of the progress! But there are so many situations, hours and nights trying things over and over again without solving the problem that makes you want to throw your PC out of the window. But in the end, you get things in some way done and it's all worth it again.  To make a long story short: it's kind of difficult for me sometimes to stay motivated, meet my self- claim and hold my stamina to constantly push myself to learn.

Even though you started your artistic practice with drawings, do you still see the same style reflected in your digital works?

In my understanding personal aesthetic is a mixture of everything you surround yourself within daily life, your interests, and your personality.  In my case I got a lot influenced by surrealistic art, fashion and product photography as well as from my interest in flowers and nature in general.  Also, I believe that a huge part of the creative progress is intuitive - when I look back to my old drawings when I was around 15,  I see the same language of dynamic forms I still use in most of my artworks.