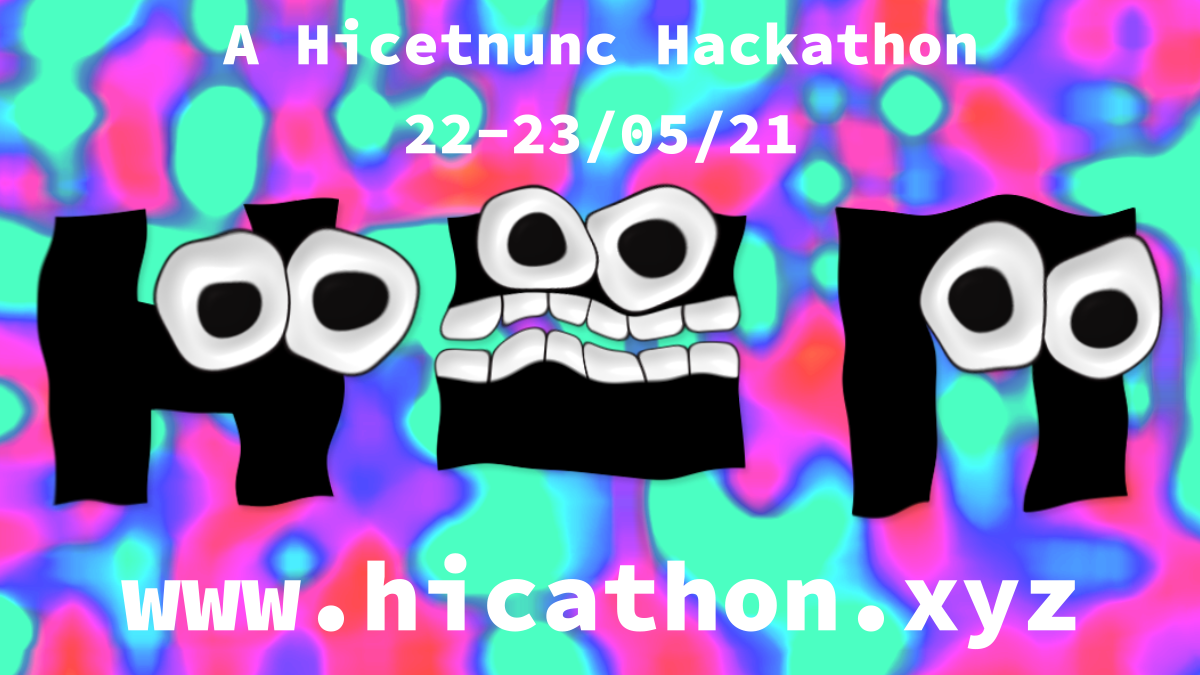 The Hicathon was an all volunteer community-led event to support and accelerate the development of what has become the largest NFT platform by Daily Active Users (+2,500 p/day). 150 participants joined across 77 different countries to take part across a range of working groups. The initiative was made possible by the hic et nunc community, donations from artists and collectors, and generous grants of 2,550 tez (approx $8.772 USD) from Tezos Commons and 20,000 tez (approx $73,500 USD) from the Tezos Foundation. Arthur Breitman, an early architect of Tezos, has also joined hicathon as a keynote speaker.

In addition to key strategy discussions on the evolution of the platform and its roadmap, participants focused to accelerate and prototype new features implementations such as galleries, resales and dApps. As a decentralized community without any official leadership or company behind it, major discussion points revolved around finding a decentralised governance model for the hic et nunc hDAO token. The hicathon also served as an experiment in self-organisation and finding consensus. Non-technical groups worked on creating the foundations for a democratic governance model that will eventually allow the community to vote and make binding decisions for the future roadmap of hic et nunc.

Among the topics explored participants also discussed the idea of galleries, a limited feature that has been prototyped on the site under the public “galleries” page but not yet offered to all users. In addition, there has been a strong desire in the community to extend the core functionality of the site in other ways. Three of the most popular requests included auctions, the splitting of sales, and unlockable content for OBJKTs. Solutions for auctions and the splitting of sales included UI mockups and functional prototypes.

The new prototype for the collaborative smart contract for splitting of sales will allow users to mint from a special collaborative wallet ID and specify what percentage of the sales each user should receive. Future development goals for this feature include considering how this can be of use to curators, support more users, allow everybody who is a part of the collaboration to mint, a signing system for collaborators to sign the terms before creating the contract, and even allowing the contract to be changed in the future.

Tezos is a clean and very fast blockchain that allows quick series of transactions.
Our team at the #hicathon managed to produce a new type of NFT will variable revenue shares between multiple collaborators.

Hic et nunc means 'here and now', and for its founder, Rafael Lima, "the main idea has been experimenting with creative economies right now as an alternative, also to the traditional "DeFi" (decentralized finance) mode of thinking." Lima has successfully navigated running the platform single-handedly and with the help of contributing developers (total sales as of May 25th were 1,227,469 tez, an equivalent of approximately  USD $4,222,493 USD). The hicathon has aided in bringing clarity to the platform's short and mid-term vision. From here, the community will keep on working and developing what is left to be done thanks to the grant from Tezos Foundation. The aim is to implement the discussed new features and ideas into the platform.