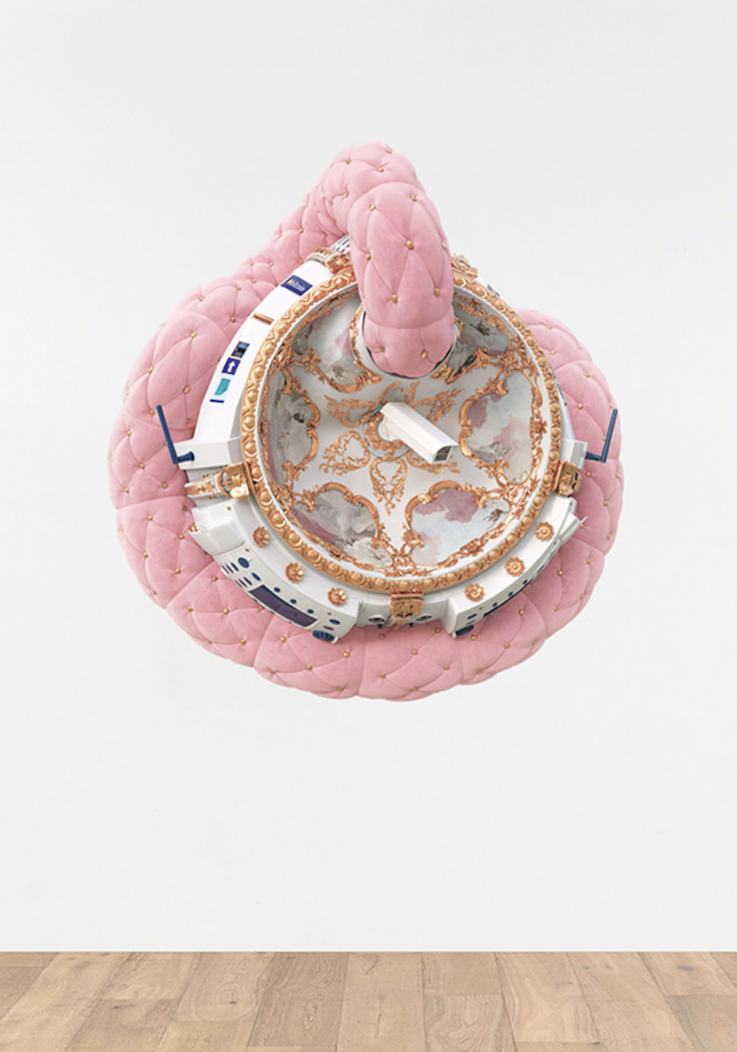 In his third solo exhibition with bitforms gallery, Jonathan Monaghan presents Den of Wolves, a new body of work surrounding the aesthetics of power. The exhibition takes its name from the video of the same title made at the beginning of 2020. When the artist first started on this piece, its barren urban environments were meant to emphasize feelings of isolation often caused by a disconnect between humans and technology. However, as the piece debuts over a year after its initial inception, these scenes foreshadowed the unrest and turmoil that characterized most of 2020 and early 2021.

Den of Wolves is centered around a continuous camera shot of uninhabited spaces. Rows of empty shelves inside a supermarket elicit an uncanny familiarity—a scenario that became commonplace in the wake of the coronavirus pandemic. Three unique wolves act as protagonists who navigate through deserted commercial arenas. With liturgical distinction, a wolf drags a monarch’s ermine coat with its teeth across a Walmart aisle, another gathers a scepter from an Apple store sales booth. It becomes clear that the wolves are agents indebted to a greater entity of hybrid extra-terrestrial creatures.

As Den of Wolves continues to unfold, the viewer encounters a familiar architectural site, the US Capitol building. Or rather, a version of the Capitol that is peppered with neglected bike shares and gentrified with Monaghan’s take on an Apple store and a Whole Foods. The artist has long examined the architecture of power and authority, yet this video was made before rioters attempted to take over the Capitol on January 6, 2021. The video ends as the wolves return to a spacecraft, complete with a hipster coffee shop, abandoning Earth and its burdens. The ship sails away, leaving a prophetic reminder that other narratives represented in this work could come true.

Printed works within this exhibition include Sentry VIII, Sentry IX, and the Soft Power series. These pieces are a continuation of the artist’s investigation into the appearances of sovereignty, drawing on a range of authorities from traditional monarchies to the tech companies of Silicon Valley. The works combine the manifestations of influence in Monaghan’s signature style of juxtaposition. His subjects are decorated in regal fashion and modeled in the style of royal portraiture. However, instead of traditional jewelry or adornment, luxury fabrics are coupled with robotic peculiarities and face masks. Soft Power equates the digital age to that of centuries past, drawing comparisons of absolute authority to those of technological control.

As the exhibition evolves, the artist will present a series of hypnotic looping digital animations of a hand in a velvet glove caressing pieces of architecture. Minted as a non-fungible tokens, or NFTs, this work builds upon Monaghan’s previous success minting artworks with cryptocurrencies and comments on desire and wealth. Stay tuned for weekly drops on bit.art.

The works in Den of Wolves reflect on the shifting landscape of economic power and authority in the digital age. Monaghan’s prescient vision reminds us of an artist’s ability to extrapolate the future from their perspective on the present.